Power STK (STK4132, 4142, 4152, 4162,4172, 4182, 4192, II) has been used for a long time, which used to be generally used for high-end brand amplifiers or audio which are said to deserve to be called Hi-fi audio even now. And according to the specifications, this STK 4132 power has THD (Total Harmonic Distortion) or the language is very small, the signal defect is very small, which is at least 0.4%, so it's no wonder it has low noise and linearity of sound or clear audio so it may be very worthy to be called Hi-fi audio.

IC STK4132 already contains 2 power amplifiers that are integrated in an IC, so to make a stereo Power Amplifier with an output power of 40 Watts, just an IC STK4132 is enough.

Here is the complete circuit diagram: 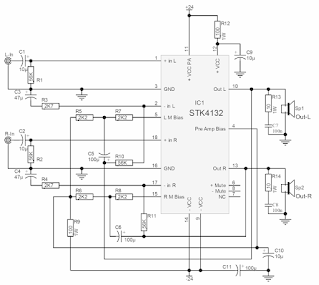 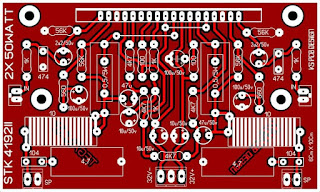 This power amplifier is very suitable to be juxtaposed as a satellite speaker to assemble your own 2.1 audio because the sound is clear.