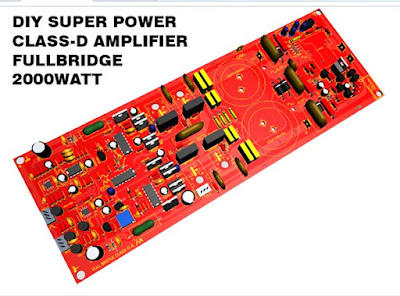 Class D amplifiers are known as PWM (Pulse Width Modulation) amplifiers or Switching amplifiers which are now increasingly popular in use. Replaces the class AB amplifier that has been used a lot before

Then what is the D class amplifier like? And what are the advantages?

Class AB amplifiers have a relatively large "power dissipation" (loss of power) that requires a large amount of heat sink. The greater the power (Watt) of class AB amplifiers, the greater the cooling needed. Here there is more or less a power loss of about 25 ~ 40% which turns into heat, which must be removed through the cooler.

Class D amplifiers produce almost no heat so they don't need a cooler. The efficiency achieved is close to almost 100%, only requires a little space and a few supporting components, and of course, the price becomes cheaper. Only the INDUCTOR and CAPACITOR components of filters in class D eat a lot of space.

The working principle of Class D Amplifiers
Sound signal (audio) is a signal in the form of Sinus. Class D amplifiers first convert these sound signals into "ON-OFF" pulses (such as switching) with "period length" which can change as shown below (indicated by Vo). Therefore class D is also called PWM (Pulse Width Modulation)
To change the input signal in the form of a sine to a PWM signal, a triangle oscillator is used and a comparator as shown below.
Then the PWM signal is amplified using the Gate drive amplifier and an amplifier Output using the FET (MOSFET).
The output signal in the form of PWM pulses is then converted back into a sine signal using "Low Pass Filter" (which consists of Lf + Cf) before being to the Speaker.

The following is the PCB layout of a Power Amplifier Class full D2K bridge with a double layer layout: