When you need an amplifier with high watt power. For use in applications such as concert, theater, the festivals etc. This circuit is most suitable. Both Loudness and durability, that courage to try. 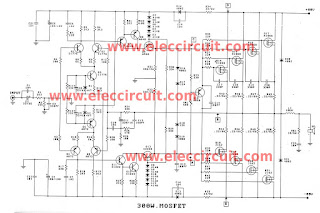 For this MOSFET Amplifier circuit, typically the maximum watt power at load 4 ohm equal to 300 watt. or about 200 watt at load 8 ohm. Which the watt power very much this level. If you are not satisfied. Also may added a higher power.

For example : Increasing onto 1200 watt by used the bridge adapter circuit. Or If will use a folk way that locals they made popular are connects the output MOSFET transistors in several parallel. To can resist the higher currents. Then connects the speaker that also the several parallel util the load is very low resistances, some time is internally OHM Now also called to as a 1000 watts !

Which would you prefer, you can choose as well.
Source : http://www.eleccircuit.com/300-watt-1200-watt-mosfet-amplifier-for-professionals-only/