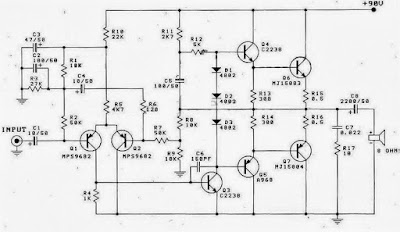 Output power can be generated by the power amplifier circuit is 100 watts RMS with a load in the form of loud speaker 8 ohm. Power transistors in series OTL 100 watt power amplifier must be equipped with a heat sink on the job whose function is to absorb the heat produced by the power transistor. To avoid the surge voltage at the output terminal circuit 100-watt power amplifier OTL this needs to be supplemented with a series of delay (speaker protector) to connect the output terminal to the loud speaker.