Editor Electronic Circuit Published Sunday, November 15, 2015
Little Laser Trip Wire circuit presented here can detect movement of people or objects while passing through the laser beam and trigger security alarms as alert signals to those concerned. What is behind this little laser trip wire is actually a red laser line that triggers a latch-switch when tripped. Here it is created by a single laser beam, a small light sensor brick, and a series of optional reflectors/mirrors.

In this article you will learn how to build a laser trip wire out of inexpensive electronic components, and you will build two circuits – the laser beam sender circuit and the laser beam receiver circuit. The receiver circuit includes an electromagnetic relay to assist the switching process of external electric loads such as floodlights, home alarm systems, etc. 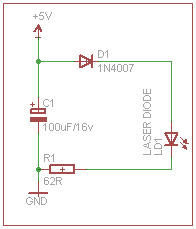 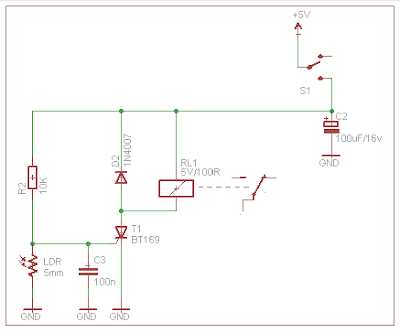 At the heart of the laser beam sender is a standard 650nM red laser diode having 5mW of power. The laser diode is fired by a 5 V dc supply with the help of two supporting components D1 (1N4007) and R1 (62R). Although the author used a “modified” laser diode lifted from his cheap laser pointer, you can use any (suitable) readymade laser diode module/card available from reputed online/offline components vendors.

Forepart of this circuit section is a 5mm photoresistor (LDR).This component is used to trigger the relay latch circuit wired around the planar passivated, very sensitive gate silicon controlled rectifier BT169 (T1). The 1N4007 diode (D2) connected in antiparallel with the electromagnetic relay (RL1) functions as an “orthodox” flywheel diode to protect the electronics from damage due to the back-emf pulse generated in the relay coil’s inductance when T1 turns off. Note that the relay should energized (and latched) when the laser beam does not shine on the photoresistor. You can use the power/reset switch (S1) to activate/deactivate your laser trip wire.

If you are planning on protecting your staircase with the laser tripwire, then it is better to set it up as shown in the following example. First of all, try to place the sender and receiver units at the top of the stairs with a slight distance between them. Next, point the laser beam from the sender on a reflector placed at the bottom of the stairs and align it with the light sensor of the receiver. On the other hand, if you want to protect a wide-zone, then it is more estimable to use a series of reflectors/mirrors with your laser trip wire system!