Editor Electronic Circuit Published Thursday, June 28, 2012
To take advantage of sunlight shining on the earth can continue to be utilized to serve as a power source so that we can at least save on electricity prices continuing to rise, below is one of a series of simple power plant can be created and used to fill your motorcycle battery or for emergency lights.
The circuit scheme of Solar Power Generation 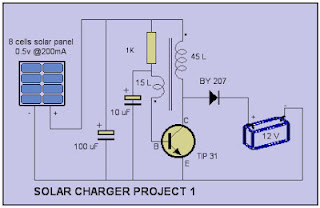 How it Works series:
Sunlight is received by the solar panels are then processed into electricity, but electricity generated from each panel is still too small where the 8 Cell Panel arranged in series only mrnghasilkan voltage of approximately 4 volts with a current 200 mA.
nah therefore required an electronic circuit to increase the voltage and current enough to be used as a Battery Charger.
Electronic Rangakain act as a series of DC to DC Inverter (DC to DC Inverter), which was built by two pieces of Capacitor, Resistor 1, a transistor, a diode, and a coil which is the point of the creation of this series.
The circuit was built with a single oscillator system (blocking oscillator) which was built by the transistor and a coil in which the primary winding totaling 45 turns and 15 turns in the secondary as feedback to provide the voltage at the base of the transistor output of the primary winding connected to the diode and used to The battery charging.
When the circuit is coupled with the Emergency Neon Lights will certainly get enough voltage to light at night for free. because its batteries during the day in charge by the sun.
The success of this experiment is a way of making a coil which is the same way with the topic of emergency fluorescent lights
.
List of Components