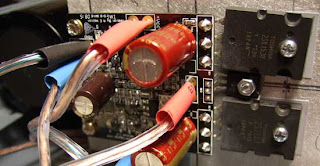 Aussieamps nxV200 MOSFET with the V-Fet 2SJ201 2SK1530 pair modules Aussieamps compact and powerful amplifiers with a craftsman to two amps for stereo bi-amping his large two-way speakers were purchased to build. He approached me, power supplies, design, assemble and deliver housing.

I modulised construction of: mounting the amplifier modules to the heat sink, the construction of the CCTS rectifier. on a strip of day, the Assembly speaker binding posts, captured power cord, fuse, on / off switch and input jacks on the rear panel of the amplifier and the installation of the transformer and large capacitors (20 uf 000 by rail).

Aussieamps nxV200 V-Fet Amplifier 200W 2SJ201 2SK1530 compact and powerful. It took two days just to marking and drilling of the case and HS do. And four days to assemble the first amplifier. The second amplifier just two days. Oxygen-free copper wire was used for the connection and the son of the signal. Brass cones were attached to the feet, and the case is heavy gauge steel.