Editor Electronic Circuit Published Monday, April 23, 2012
Taken by themselves, the properties of the PA300 amplifier are not revolutionary. But taken in combination, they show something special: a robust 300 watt hi-fi power amplifier that is not too difficult to build. There are several starting points to the design of a power amplifier: pure hi-fi without any compromise; simplicity and reliability; high output power. The design of the present amplifier is a mixture of these. The result is a unit that does not use esoteric components, is not too complex, and is fairly easily reproduced. In fact, it could well be named a 'Hi-fi public address amplifier'.

There will be a few eyebrows raised at the power output of 300 watts (into 4Ohm); it is true, of course, that in the average living room 30–40 W per channel is more than sufficient. However, peaks in the reproduced music may have a power of 10–20 times the average level. This means that some reserve power is desirable. Also, there are loudspeakers around with such a low efficiency that a lot more than 30–40W is needed. And, last but not least, there are many people who want an amplifier for rooms much larger than the average living room, such as an amateur music hall. 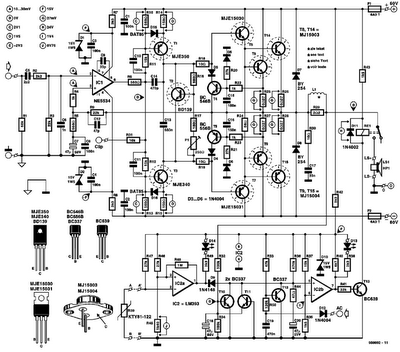 the exception of an IC at the input, the circuit of the PA300 amplifier is conventional.