Editor Electronic Circuit Published Sunday, March 11, 2012
Lightning Protection ELCB (CIRCUIT BREAKER Earth Leakage)
Installation of a building usually equipped with a safety short circuit current and current limiters. In the event of a short-circuit the safety fuse will break, and when the series occurred over the current-limiting load (MCB) will open the circuit so that circuit current flow to the inside of the building to be disconnected. 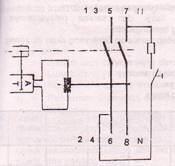 If it occurs in an electrical installation safety is a leakage current and current-limiting fuses can not provide security so that the power loss will occur continuously. Apart from that, if there are power users have a leakage current and untouched by humans, the safety will not be decided so that the electrical circuit is quite dangerous it would be safe if the installation is already installed grounding.
But when man-voltage electrical power users then all these safety devices can not be secured. For that installed a safety device, called an Earth Leakage Circuit Breaker or ELCB. This tool is able to decide the relationship string of leakage current in the event of 30 MA in a time of 0.1 seconds. Leakage current is intended to be through electrical components in the normal state of no voltage or phase conductor directly touched by humans.
How it Works chain of ELCB
ELCB separate chain consists of a magnetic coil and switch. This switch can be manually controlled electric and magnetic fields. If the position of liaison ELCB switch is closed, then the source voltage will flow gets the load. Magnet coils which will open the circuit to work when there is an electric current flowing in the coil. Magnet coil circuit that will open, works when there is an electric current flowing in the coil. ELCB magnet coil also called z. Travo, which normally do not get the voltage. If there is leakage current is z. Travo will work to open the circuit by pulling the main chain of the switch should be set up in advance for reuse and so on.