Editor Electronic Circuit Published Friday, February 10, 2012
Wave antenna 5/8 consists of a vertical radiator which is fed at the base of the antenna. A suitable device of some sort should be added between the antenna and feedline if you want to eat with coax. Adding a coil in series with the antenna on the base is one of these methods are suitable. 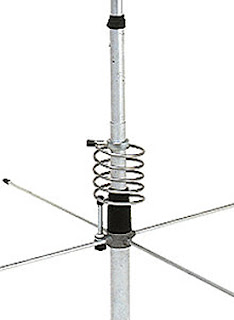 So why would anyone use an antenna 5/8 wave if they have to go through all that extra work? After all, a ground plane antenna provides a good match. There are several answers. The first is GAIN. The computer shows that the antenna (mounted 1 foot above the ground) has a margin of about 1.5 dBd higher than a dipole (also installed 1 foot above the ground.) The second reason you might want to use the wave 5/8 vertical is to get a lower angle of radiation. Peak radiation angle A half-wave antenna is 20 degrees. You will find that the angle 5/8 wave antenna radiation is only 16 degrees so it is better dx antenna.

You may have noticed a pattern developing here. A quarter-wave ground plane antenna has a radiation pattern that produces the maximum gain at about 25 degrees and half-wave antenna drops to 20-degree angle, and wave antenna 5/8 further drops to 16 degrees angle. So why not just keep extending the antenna to one full wave? Well it would be nice if it worked, but unfortunately the wave patterns begin to create a very high angle of radiation waves exceed 5/8. So we've reached the maximum gain at this point and extend the antenna further reduce profits only where we want it (low angle).

Of course if you are interested in a very short jump, extend the antenna will produce a nice profit on the dipole. All the length of the antenna depends on various factors. Some of these factors are: height above ground, the diameter of the wire, nearby structures, the effects of other antennas in the area and even the conductivity of the soil. This page allows you to calculate the wavelength for the antenna 5/8. It uses the standard formula, 585 / f (178.308 / f for metric) MHz to calculate the length of the element. If you have experimented with 5/8 wave antenna before and know a better formula for your QTH, feel free to change the formula accordingly. This formula is for the antenna wire.

Of course if you build your antenna out of the tube, total length of the antenna will be shorter, for example I have found that 21.5 feet seems to provide maximum benefit to the frequency of 28.5 MHz when using a 1 "tube, and 22.5. Foot seems be the best long-wire at the same frequency. Since the formula to calculate the antenna to be about 2 feet shorter, be sure to experiment and maybe add a little for your final term.