Editor Electronic Circuit Published Thursday, February 09, 2012
Radio Control for toy car
Play toy cars controlled by radio signals is an interesting game. The much-loved toy cars children, plus a simple circuit would be ideal for toy cars. This series of families use traditional digital CMOS IC which requires a very small electric current, so it does not impose on the performance of the original toy cars.
In this system, radio signals emitted not continuously but only generated when the controller sends a command left / right or forward / backward, and even then only a radio frequency of an intermittent, so it is sending pulses of radio wave frequency.

Number of pulses sent represents a command is sent, the command GO is represented by 8 pulses, represented by 16 pulses LEFT, RIGHT DOWN 32 pulses and 64 pulses. Command sent to a combination of two orders once gus, which is a combination of command forward / backward and right / left, for example, could be sent forward command and left once gus, in this case the number of pulses sent is 24, which is the sum of the forward command command as much as 8 pulses and left as many as 16 pulses.
Once a command is sent, the system stops sending commands in a certain time lag, the lag time it takes the receiver circuit will have sufficient time to execute properly. Frequency pulses were visible on the right side of Figure 1. 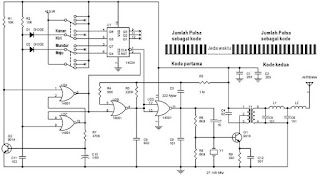 How it works The transmitter
Radio signals generated by the oscillator circuit formed by transistors Q1 9016, the working frequency of the oscillator is determined by the crystal Y1 is worth 27.145 MHz. A very critical part of this oscillator circuit is T1, L1 and L2, which specifically dealt with separately at the end of this article.
Work of the oscillator is controlled by a NOR gate U2D 14001, while the output gate (pin 3) is worth '1 ', the oscillator will work and transmit radio frequency 27.145 MHz, and at the output U2D value '0' the oscillator will stop working.
U2D NOR gate receives the clock signal from the NOR gates U2B. NOR gate CMOS type with the help of resistors R4 and R5 and capacitor C8 to form a low frequency oscillator circuit to control the clock shaper of existing digital circuits. Working from the clock generator is controlled via the input leg 6, the circuit will generate the input clock that is berlevel '0 '.
NOR gate U2A and U2C form a latch circuit (RS Flip Flop), due to the influence of resistor R2 and capacitor C11 which is fed to pin 9 on U2C, when the circuit gets power supply output U2C must be '1 'and U2A output (pin 3) to '0 '. This situation resulted EUIS clock generator generating a clock U2B work and release the reset state of the enumerator 14 024 IC (U1), so that the U1 start chopping and 27.145 MHz oscillator circuit to send pulses of the clock generator frequency during work.
At the start chopping, all the output IC 14 024 enumerators in kedaan '0 ', after chopping the 8 pulse output Q4 (pin 6) will be '1', after chopping 16 Q5 pulse output (pin 5) to '1 ', after chopping 32 Q6 output pulse (pin 4) to '1 ', after 64 counts pulses output Q7 (pin 3) to '1'.
Outputs are used to control the voltage above 9 feet U2C through diode D1 and D2, as long as it remains one of the output value '0 'then the plant U2B clock still works, it will continue until dankatode D2 D1 cathode to '1' so that the foot 9 U2C a '1 'as well. This situation will lead to 3 feet U2A output to '1 ', which stops the clock generator and reset U2B enumerator 14 024 danberhenti is sending pulses of frequency 27 145 MHz.
To generate the lag time for the receiver circuits have enough time to perform the command, used a series of 9014 Q2, the resistor R7 and capacitor C10. The magnitude of the delay time is determined by the value of R7 and C10. The switch to send the command forward / backward and to send the command left / right are two separate switches. Each switch has three positions, the center position means that the scalar does not send commands.
How It Works Recipients
Figure 2 is a recipient of a series of paired images dimobil toy, serves to receive signals from the transmitter to control the motor cars, so cars can move forward / backward and left / right. Transistor Q1 with the help of resistors; capacitors and T1 form as a series of 27.145 MHz radio signal receiver. T1 in series with a T1 is exactly the same used in the transmitter circuit, how to make it are discussed below.
Transistor Q2 perlangkapannya formed following a series of pulses to change the radio frequency received from the transmitter into the box pulses that can be accepted as a digital signal by the CMOS IC. Digital signal will be received as the clock had to be chopped by enumerator 14 024 IC (U2). Output of 14 024 would correspond to the number of pulses sent by the transmitter, forward command and left (which is used as an example in the discussion of the transmitter) is the pulse number of 24, the enumeration of these pulses resulted in 14 024 to be output Q4 = '1 ', Q5 = '1', Q6 = '0 'and Q7 = '0'.
The received digital signal other than U2 used as counter clock IC 14 024 discussed above, is also used to move the 3 pieces of the time delay circuit to generate pulses which controls the sequence of work.
The first control pulse will appear after submission frequency pulse stopped because the lag time between sending the code, this pulse count function to record the results of 14 024 to 14 042 U3 (D Flip Flop), so that the final condition of 14 024 will be retained to control the motor. After the results were recorded for 14 024 14 042, 14 042 counter is reset by the second pulse, so that after the lag time counter counts up starting from 14 042 to 0 again.
Circuit formed by transistors Q3, Q4, Q7, Q8, Q9 and Q10 H Bridge is named as a series, this series is very powerful to drive the DC motor. With this circuit the DC motor can be rotated to the right-to-left or stop motion. The main requirement is the use of this circuit Q7 and the base voltage of Q10 base voltage must be opposed, for example, the base Q7 = '1 'and the base of Q10 = '0' motor rotates to the left, the base of Q7 = '0 'and the base of Q10 = '1' motor will turning to the right, the base Q7 = '0 'and Q10 base = '0' motor stop motion, but should not be happening base Q7 = '1 'and the base Q10 = '1'.
Similarly, Q5, Q6, Q11, Q12, Q13 and Q14 form an H Bridge. H Bridge to the left in Figure 2 is used to control a motor that regulates the movement of cars left / right, while the H Bridge to the right is used to control a motor that regulates the movement forward / backward cars.
The relationship between outpur enumerator 14 042 and input D Flip Flop 14 024 is arranged such that the signal is fed to each of the H Bridge can not be all '1 'simultaneously. 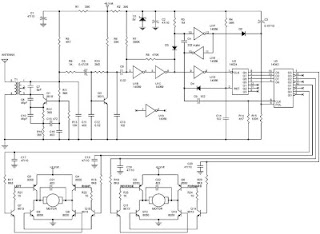 Manufacture of transformer TX and RX
Transformer T1 in the series transmitter and receiver, is the same stuff, and have made ​​themselves. Transformer was built using a plastic transformer Koker (spare part radio) that has a step that appears 5 lines that can be filled with coils of wire, as shown in the photograph. Wearing this Koker facilitate wire transformer windings. Otherwise it could be similar Koker, just the usual wear. Koker is a small transformer and feritnya also small (3 mm) as that used to be used for the assembly of CB 27 MHz radio.
Can wear a wire to wire the transformer in the unloading of Koker, carefully open coil of wire that already exist in the Koker because the wire is quite smooth and quite easy to break.
Step 1: rolls of wire which is numbered 5 feet to 4 feet in the direction of h (CW) for 3 rolls right on level 1 (pathway level above the bottom line)
Step 2: Roll the wire from 1 foot to 2 feet in a clockwise direction as much as 4 rolls right on level 2.
Step 3: Continue the roll (from step 2) in a clockwise direction as much as three quarter roll to 3 feet on three levels. (Can be determined exactly a quarter of the roll, because it has a track kokernya split into 4).
Manufacture of coil L1
Roll of copper wire diameter from 0.3 to 0.5 mm by 10 quarter rolls on Koker diameter of about 4 mm (which will be released) is also in a clockwise direction.
Manufacture of coil L2
Roll of copper wire 0.1 mm diameter by 50 rolls in plastic Koker without ferrite diameter of about 3.5 - 4 mm (look for the plastic material from scrap) is also in a clockwise direction. Long section on liputi rolls along the 5 mm.