Editor Electronic Circuit Published Friday, February 10, 2012
Requires us to make things systematically and efficiently, because time is very valuable to us, then some of the advances in technology has been applied in various fields, including education, because this is where all the technological advances developed. Lots of technology is rapidly expanding in our country today. With technology growing by leaps and bounds this is what will make the work more systematic and efficient. Based on our technological advances and his friends create a system are related to the Electronics course, we propose the same faculty to develop a community tool. We got a second job in four semesters, which makes the FM transmitter.

Departing from hobby assembling electronic items, we try to assemble a mini-power transmitter that can emit a short signal of approximately 100 meters with power (power) 5 watts. This is a pilot who later became 12 watts. With 12 watts of power, radio broadcasts to reach a village.
1.2 Formulation of Problem Problems are handled from this lab assignment is to create and analyze the quality of an FM transmitter to get the data at test point 1, point 2 test, test point 3 and the exact frequency as desired. Things are of practical tasks is restricted only to analyze the quality of a transmitter and retrieve data from an existing test point.
1.3 Limitations Problems to be addressed in this lab assignment is limited to some of the following: 1 • Retrieving data from the frequency and calculate TP 1 to TP 3. 2 • Analyze a transmitter in the room, based on measurement data and make conclusions.
1.4 Objectives Objectives to be achieved in this task are: A. Students can design and make the circuit in fm transmitter. 2. 12 Watt FM transmitter that can be made of appropriate tools and can be marketed.
1.5 Methodology In completing this lab assignment, the steps are as follows: 1 • Learn about basic electronics concepts and learn concepts about the mechanism of FM modulation. 2 • Analyze and conclude the experimental results, and give advice when it is applied to the practical task of the real system. 3 • Preparing a report on second semester practicum assignment.
1.6 Discussion This book of this lab assignment consists of 5 (five) chapters, in each chapter related to one another, namely:
CHAPTER 1: Provide background on the issues, goals, problems and constraints of the problems discussed in this lab assignment. CHAPTER 2: Provide the theoretical basis to support problem solving in this lab assignment. The basic theory is given include: the mechanism of the tool in used in making the FM transmitter
CHAPTER 3: Planning and manufacture of tools and how each blog diagram contained in FM transmitter CHAPTER 4: Contains the results of calculations and data processing, and analysis results calculation. CHAPTER 5: Provide conclusions about the results already obtained and suggestions. CHAPTER II BASIC THEORY
2.1 Koker 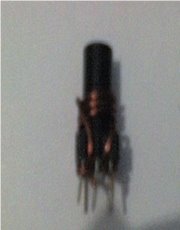 Koker serves to regulate or determine the frequency of the radio transmitter. In koker also Ferrite that serves as a core inductor in addition there is an inductance coil comprising primary and secondary winding. Way of working is to facilitate search koker empty wave. When filling koker in turn to the right to a maximum frequency of the oscillator produce more low. If the FM transmitter lights, turn left up the core koker to hissing on the FM radio signal is lost it will be found a strong and stable.

Coil of wire that is wrapped with a particular matter, in this case to determine the value of the inductor is typically used Q-meter. Inductor serves as an impedance adjustment, so that the output of the impedance can be changed and in accordance with the desired (match). 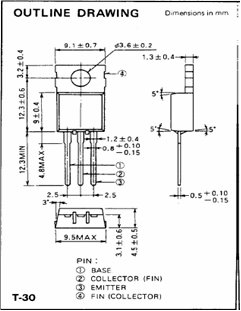 Transistors have two connections, one of which is the emitter and the other base and collector. Because this is a transistor as two diodes. ransistor C1970 type normally used to raise the voltage 0.8 to 1 watt, I think it was in the C1970 study could increase about 8 times. On the C1971 transistor can be coupled directly from the exciter circuit and the voltage of 6.5 to 7 watts or bias raised about 10 times. If the C1970 to C1971 join the output power of about 12 watts or more. (All will be explained in Chapter III)

2.4 Exciter Exciter circuit consists of an oscillator and buffer. •  Oscillator Transmitter is the core of an oscillator. To be able to build a good communication system should begin with an oscillator that can work perfectly. In the communication system, the oscillator generates a sine wave is used as the carrier signal. Then the information signal is superimposed on a carrier signal with the modulation process. •  Buffer (Buffer) All types of oscillators require a buffer. Buffer serves to stabilize the frequency and / or amplitude of the oscillator from loading the next level. Usually a buffer consisting of 1 or 2 levels of the transistor amplifier dibias as class A. The heart of the broadcast transmitter FM exciter is located on it. Function of the exciter is to generate and modulate a carrier wave with one or more input (mono, stereo, SCA) in accordance with FCC standards. Which has been modulated carrier wave is then amplified by a wideband amplifier to the level required by the next level.

2.5 Booster Power amplifier is more popularly known as Booster. Booster is a device mounted radio transmitters attached to and used to amplify radio frequency transmit power in any direction that you want to go. For example, for a transmitter power of 25 watts which include only a single village, Booster is used to transmit power to be 50 to 100 watts so it can be surrounding the district. Boosters are generally small squares connected by cable to the transmitter which he built. Power amplifier is divided into two. First, the power amplifier which amplifies the signal in one cycle, the best signal quality and harmonious. The second, which only reinforces the power amplifier input signal is less than half of the cycle and generate a wave that damaged the same frequency. 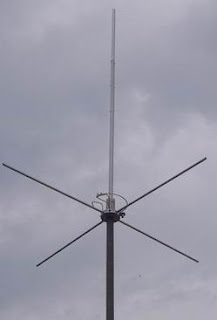 
2.7 Transmission Line Transmission line is the introduction to the generated power to the transmitter antenna. As an introduction to power, a good transmission line will not reduce the power of delivery and did not radiate, because it is the duty antennas radiate. So that the maximum power transfer occurs, then the transmission line characteristic impedance should also have the same view of resource load. Transmission line characteristic impedance is 300 W common (ribbon cable to the black and white TV), 75 W (on a color TV coaxial cable) and 50W (coaxial cable to the amateur radio equipment). Additional tools are in need in assembling a 12-watt FM transmitter, among which are:
•  Power Meter Power Meter is a tool to measure the wave. On a transmission line that is not worth it, but the waves come rolling waves are reflected. Wave dating from the source to the load direction (from transmitter to antenna), while the reflected wave from the opposite direction (from the antenna to the transmitter). Usually on the Power Meter has two scales, one came to power and one for the reflected power. The reflected power scale to be smaller than the scale for the future.
•  SWR Meter SWR meter or measuring comparative standing waves are used to measure the ratio of the incident wave and reflected wave. So it is known how a resource commensurate with the burden. The working principle is based on the Power Meter SWR Meter. If there is only one Power Meter measurements, the SWR can be calculated from the incident power (Pf) and the reflected power (Pr) with the formula: SWR = (OPF + ÖPr) (OPF - ÖPr).
• From the formula, the state equivalent (Pr = O) will be obtained SWR = 1.
• For a state that is not worth going to get SWR> 1.
• For the worst circumstances in which all power is reflected back dating (Pf = Pr) will get the SWR = infinity.

•  Dummy Load To be able to broadcast a maximum transmit power, but efficient, it takes a load impedance that is known with certainty as it is called Dummy Load reference. Dummy Load is free from the influence of frequency and can handle the disposal of the transmit power is too great. Dummy Load impedance is usually 50 or 75 Ohm. Dummy Load can be made with put some resistors in parallel in order to obtain the desired resistance and power. Parallelize some resistors minimize the stray inductance of the resistor. For example, can use the carbon resistor 300 Ohm / 2 watt for 6 seeds that are connected in parallel to get the Dummy Load with power of 12 watts and 50 Ohm impedance.

3.1. Preliminary To plan and create a 12 Watt FM transmitter, need to know first about a block diagram of the system, the working system of the circuit is Overall, the calculations and planning.
3.2. System Block Diagram and Figure Series Overall

The picture above shows a block diagram of this system and image The overall network is made in full. Transmission System Block Diagram picture as a whole

Picture Exciter Circuit Network consists of exciter oscillator and buffer. In this Exciter Network using the specification of components as follows: •  Koker •  Inductor: L2 = 0.12 micro-Henry, Henry Micro L3 = 0.12, L4 = 0.2 micro-Henry •  Transistor: C930 •  Ohm: 5.6 K, 47 K, 33 K •  Babysitter WANTED: 2.2 nF, 100 nF, 18 pF, 20 pF, 5 pF •  trimer: 5-60 pF Exciter is a network that produces oscillations, because the exciter are oscillator that acts as a sine wave generator and it will be dimodulasikan. In the oscillator system is also available buffer (buffer) that functions to stabilize the frequency / modulation oscillator amplifier due to the loading process by the next level.
3.2.2 Network Booster (Power Amplifier)

The series of images Booster In the Booster circuit uses components with the following specifications:
•  Inductors: L1 = 0.2 micro-Henry. L2 = 0.2 micro-Henry. 0085 L3 = L4 = 0.04 micro micro Henry Henry. L5 = 0.1 micro-Henry. L6 = 0.2 micro-Henry L7 = 0.2 micro-Henry.
•  Transistor 1970: 10 V VCE Ic 0.1 A Β 10-180
•  trimer: 5-30 pF Booster circuit consists of two levels of transistor amplifiers, each working on a class C, each input and output transistor amplifier circuit is given impedance adjustment. Strengthening of the first transistor using C1970. Strengthening the circuit has a 9.2 dB power gain (8 times), so that from the exciter-power 0.25 W of power generated should be 2 W. In fact the output of this first level of reinforcement produces only 1.75 Watt power, this is due to the loss of matching network circuit. Strengthening of the second level using transistor C1971. The amplifier circuit has a 10dB power gain (10 times). So that the power of the first level of 1.75 W can be strengthened to 17.5 W. In fact strengthening the power of the second level only reached 12.5 Watt.
This is due to the loss of matching network and the limited range of C1971 transistor. Because the price of the C1971 transistor is relatively expensive it is to use only the C1970 transistor. Therefore, the power generated by the transmitter is not as high as 12 Watt. Because of the heat generated second transistor is large enough then we put enough cooling.

CHAPTER IV TESTING TOOLS 4.1
General This chapter discusses the testing and analysis system that has been made. In general, this test aims to determine if the device has been realized that can be worked in accordance with a predetermined plan specifications. The purpose of the tests performed on the system are as follows:
•  Knowing how the exciter circuit
•  Knowing how the booster circuit