Make a series letters from the LED

Make a series letters from the LED , Things to consider before making the sign of the LED array,
1) Use LED nodes.
2) Paint the top of the PCB with a dark color (black).
3) Note the LED specifications. In this experiment use a 5mm diameter LED nodes
that emit red, specification voltage of 3 volts.

The assembly of LED:
1) One letter composed at most 5 columns and 7 rows.
2) One column mostly composed by 6 LEDs are arranged series.
3) Then the fifth column are connected in parallel.

Here is one letter LED scheme.

Medium picture below is the lay out of the 2-letter nameplate. To make the sign 8 letter, copied from a second stay this letter. 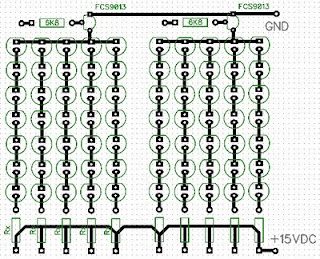 Example of LED on the letters A and B: