Parts of the transmitter AM:

1. The input signal
The input signal in the form of electrical signals generated by mechanical equipment modifier into electrical vibrations. Tools that generate these signals include a microphone, LPs, and others. Power signals issued by these tools, the amplitude is still too small, so it requires strengthening again. 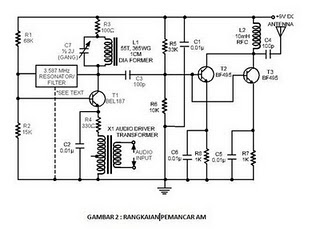 2. Audio amplifier
Audio signal that is still small signal voltage amplitude will be strengthened, so that the resulting stress intensity audio signal is strong. Amplifier section can be either audio amplifier or preamp only with the amplifier end.

3. Oscillator circuit
Oscillator circuit is an electronic circuit that functions to produce high vibration. The frequency of the resulting circuit is high because if low, this electrical vibration will not radiate much.
Oscillator which is used in the transmitter is the oscillator RF. RF oscillator is a high frequency generator that serves as a signal carrier. Terms oscillator which is capable of generating both high-frequency equipment. Electronic components that can generate these frequencies is Crystal. Crystals are commonly used in FM transmitter has rangkainan 27MHz output frequency.

4. Buffer amplifier (Buffer)
Buffer serves to insulate the RF oscillator with power amplifier, so the fixed oscillator frequency. In addition, this section also reinforces the amplitude of RF signals.

8. Antenna
Antennas in a transmitter is spearheading the delivery of a radio signal transmitter to a receiver. If the antenna is used at a transmitter not meeting the correct specification, then the results are not expected to be achieved. In addition to the range to be erratic also the possibility of damage to the transmitter circuit due to back pressure from the antenna. When the rod antenna is widely used on aircraft such as the transistor radio, car radio receiver, walky Talky, Handy Talky, and so forth.

How it works series AM transmitters:

This powerful AM transmitters ntuk fairly large, use the tuner 3.587 mhz ceramic resonator and resonator filters are also sold with a value of 5.5 mhz, 7.7 mhz and 10.7 mhz.Jarak transmitter range is approximately 2-4 km. the working principle of this circuit are: filter resonator / ceramic filters generate value from the filter frequency resonator tsb. This frequency is amplified by the transistor can be changed so that t1.frekuensi dpperlukan C7 as a regulator / placement. superimposed sound signal through the audio transformer.frekuensi which awakened by the filter resonator and fed t1 kepenguat to be strengthened further so as to achieve the desired power passed to the antenna. t2 and t3 as a buffer as a final power amp