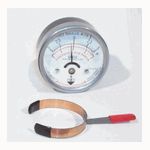 Magnetometers are scientific instruments that are used to measure the direction and strength of magnetic fields in the location that the device is located. They are used both on Earth as well on space exploration missions due to the significant variations that are found in magnetic fields based on the nature of the environment, interaction of charged particles from the sun, and the magnetosphere.

Why Are Magnetometers Used?

Magnetometers are not just used to measure the local strength of a magnetic field, however, as they can also determine their own direction and orientation. Many times the design of a magnetometer will be tweaked to match the specific quality of the device that is more important to the user. Some magnetometers are designed with a sensitivity that is great enough to detect increased sun activity before it is detectable by a visual observer which can provide an early warning of adverse effects on communications equipment. The traditional use of a magnetometer is to observe the Earth’s magnetic field that fluctuates in various locations on the planet. They are also used to conduct research on specific regions of the Earth’s crust to find minerals such as iron. More recently, the devices have been used to measure the impact of various actions taken by people have on the global and local magnetic fields of the Earth. Archaeological studies make use of the devices in order to help find ship wrecks and other sites that may have a number of magnetic substances that are collected in a single location to help start digs or recovery efforts. Some ships will also use a variation of the device in order to detect potential hazards to navigation that have moved since they were last charted.

What Are the Benefits of Studying the Earth’s Magnetic Field?

The study of the Earth’s magnetic field provides historical context to scientists regarding how the planet was created and since evolved in order to apply these lessons to the future. Historical shifts in the Earth’s magnetic field have been documented and also help determine what the impact of solar activity has been on the planet and how this will impact the future. Applications of this research range from current and future communications to ship navigation.

What Are the Types of Magnetometer?

The size and complexity of magnetometers widely vary. They can be portable or significant in size depending on the designed use. A simple compass used for land navigation is one form of the device, where those used for space exploration will be larger and more complex. The two basic types of magnetometer are: 1 – Scaler Type which is used to measure the total strength of a magnetic field, and 2 – Vector Type which has the ability to measure the magnetic field in a direction that is relative to the orientation of the device.