Examples of class A amplifier is the basic transistor circuit common emitter (CE). Amplifier type class A is made by setting dititik bias current (usually Q) on the load line. The position of point Q such a way that is right in the middle line of the load curve VCEIC from the amplifier circuit.
The is an example circuit with common emitter NPN transistor Q1. 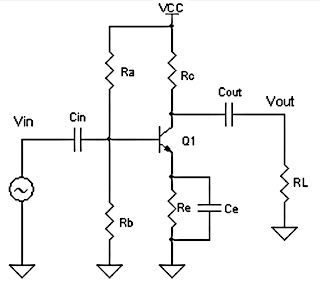 Line load on this amplifier determined by the resistor Rc and Re from the formula VCC = VCE + ICRC + IeRe. If Ie = Ic, it can be simplified into VCC = VCE + Ic (Rc + Re). Next line load circuit can be described by a formula them. While resistors Ra and Rb were installed to determine the bias currents. Magnitude resistors Ra and Rb in related series determining how much current Ib the cut point Q. Large Ib flows usually listed on the data sheet used transistors.

Great strengthening AC signals can be calculated with an AC signal circuit analysis theory. In an AC circuit analysis of all components of the capacitor C connected brief and the imaginary connecting the VCC to ground. With In this way a series of images 1-18 can be assembled into such picture 1-20. Resistors Ra and Rc is connected to GND and all short-circuited capacitor.

Typical class A amplifier, all output signals to work on active region. Amplifier type class A is called as a reinforcement that has fidelitas a high level. Provided the signal is still working in the active region, form the output signal will exactly match the input signal. But class A amplifier has low efficiency of approximately only 25% - 50%. It's none other since the point Q is at point A, so that although there is no input signal (or when the input signal = 0 Vac) transistors to keep working in the active region with a constant bias current. Transistor is always active (ON) so that most of the sources of supply wasted power into heat. Since this is class A transistor amplifier should be augmented with extra cooling like heatsinks are more large.